Because of my interests I chose to start studying mechanical engineering at the THE(Technical High school Eindhoven) in 1976, today known as the TUE(Technical University Eindhoven). It was a great time to study and lots of things were going on in mechanics and electronics. Specifically in their combination later to become mechatronics. However I was most occupied in studying mechanics, physics, specifically thermo- and aero- dynamics. The latter one I followed at the University of Delft. The first two years ‘propadeuse’ (P1 & P2) I also did a six week internship at ‘Stork Kranenbouw’ a company that builds big cranes for harbors. I concluded they would get broke soon which after another four months they actually did.

During the ‘candidates'(K1 &K2) we all had to make a choice in which direction we would go. I choose for ‘precision engineering’ but also decided to take courses for ‘materials science’, ‘material fatigue’ and ‘advanced thermodynamics’. Also we had to do a 3 month internship which I did at ‘Heijmans Materiaal & Staalbouw'(Rosmalen). I would stay their for the next four years. I was given the opportunity to introduce modern tools like using a PC for making calculations and drawings. I had started on a WANG mainframe the used basically for administrative purposes but was allowed to buy a Hewlett Packard PC a printer and a A3 plotter. I started writing programs in ansi c which where parameter driven in order to calculate all required pipes and beams for large agitators used for outdoor community water purifying systems. These pipes and beams needed to be welded together using many different angles. Now the computer calculated these angles and created the required drawings for each part and created an overview drawing showing where each part should be mounted. The pictures below show examples of what was made using these tools. On the left an agitator for a water purifying system in Djakarta(Indonesia) and on the right an agitator without a bottom bearing but dynamically balanced to reduce laterally torque. The third picture is me at the WANG terminal. 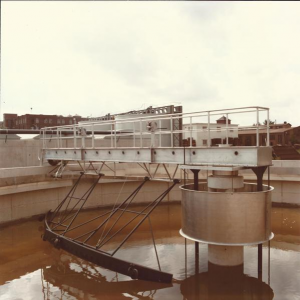 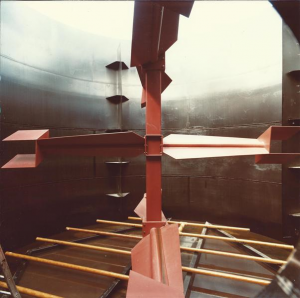 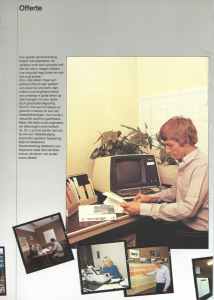 Another great project which I was allowed to design was the design and build of large ducts used to transport the 500 ºC exhaust gasses to a furnish for refining oil for Q8 (Botlek, Rotterdam). The real challenge occurs when the 1 MW gasturbine ‘trips’ or ‘stalls’ at outside temperatures down to -20 ºC. Two vents(vertical ducts in picture below) will then push large amounts of very cold air through the 500 ºC ducts within a few seconds. This was necessary in order to keep the furnish burning. Here I could really use what I had learned. It was a very exiting project indeed since an equal system in Germany failed and was ruptured just one week before my one would be started for the first time. Another challenge was how to connect two ducts is they must be able to move during sudden shrinking. No existing expansion parts could withstand the high temperature. For this I used ‘origami’ for which we found someone who knew how to do this with metal foil. As material I used Hastelloy-C from the only rolling mill(east coast USA) which could deliver what I needed. For this installation I also design a way of packing the ducts in a shielded insulation before they were put in place by cranes as you can see in the picture below. This way no extensive scaffolding was required. Below is a picture of part of this installation which performed perfectly for many years. I do want to mention here that all designs I made were thoroughly checked before we would start building them. This is common practice in construction building and also common sense since simple mistakes can lead to disasters and loss of life. At that time it was ‘Comprimo Engineering BV’ (Amsterdam) who were responsible for checking my calculations. Finally I received a generous bonus which enabled me to get my pilot license at the age of 26. 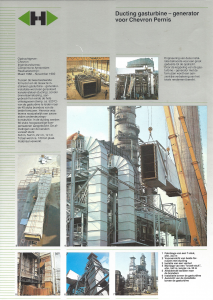 In the mean time I continued with my study and had finished ‘engineers’ 1 of 2. The second one was the actual year of passing your bull. The final project for passing the bull I did together with a fellow student and friend Jan Copier. We should try to speed up existing production machines of so called cylindrical knitting machines. Its a large cylinder with about 1000 needles which run around an produce a cylindrical sock of knitted material which is afterwards further processed. We hired a high speed camera to see what happened when we increased the speed. What happened is that the needles all broke and flew around us and after we stopped the machine Jan said to me: “I guess we don’t need the high speed camera anymore?”. After analyzing everything we proved that the existing machines could not run faster. A new design was needed for which we set the requirements.

In 1984 I made a career switch and started working for Simac Electronics(Veldhoven) as a software engineer. This resulted three years later in the foundation of “Applied Research Technology BV”(1984), developing, producing and selling memory chip programmer equipment. These memory chips were called EPROMs. After eleven years the market switched to implement programmable memory inside microcontrollers which started the end of the separate programmers. 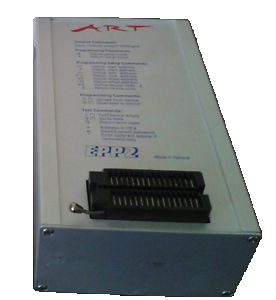 A premature start of the development and lease of in- and outdoor electronic billboards which received their commercials using an internet connection failed and the company went bankrupt in 1998. A few years later all big advertising companies started the exploitation of the electronic billboards!

I decide to take time to travel around Europe and Africa. I first made a round trip t0 most European countries flying a Piper Arrow IV. Then me and my friend Pieter visited Zimbabwe, Malawi, Tanzania and Zanzibar as back packers for two months.

After being back home I decided to start working as an employee which I did for the next six years. I had an interesting job at a company which developed sorting machines for the food industry.